So the past few weeks things have been a little nuts with adapting to the work/ school schedule thing. Due to this I haven’t been posting reviews. So welcome to the review mega post! I have pictures for some (not all,) of what we have had and I’ll talk about what we liked and such and such. Anyway thanks for sticking with me as I adjust. Review will now post on Wednesday so hopefully I won’t fall off the wagon again. 🙂 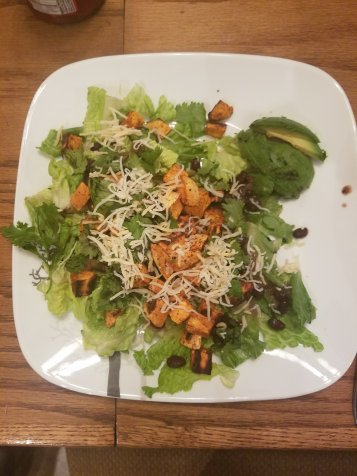 Hi, my name is Melanie and I hate beans, but I keep making recipes with beans in them in the hopes I eventually will and this never happens, but my husband Josh likes them so that’s a win. Okay so this wasn’t bad, but I didn’t enjoy it much and ended up moving the food around my plate. As usual with tacos for me I ate the filling on a bed of lettuce (because I also don’t like corn taco shells.) The potatoes came out really good, but I like baked sweet potatoes (crispy,) in general and I can eat that with almost anything. If you are trying to do meatless meals and like beans, you would probably like this. If you are me you gave it a shot and that was sufficient enough for the day.

This was one of the meals I tested out in crock pot form, as I do especially during Marching Band season. This was not good. Maybe it’s good if you don’t cook it in the crock pot, but I wouldn’t know. In the crock pot though there was zero flavor. I mean zero, I am not actually exaggerating, it was water with items in it. We suffered through it because it was what was for dinner, but I will not be trying this again. Also I won’t try it on the stove because really if you can’t get a soup to taste good in a crock pot why would you try it on the stove.

Finally a winner! Truth, I didn’t eat the beans, but thankfully they were not in the actual Tex-Mex boats. These were so good and simple! Just chorizo and cheese and spices. This will be a repeat meal for sure and I’m already thinking what to do next time (diced tomatoes, and onion, eat everything on a bed of lettuce.) It was great to have a hit after a few days of meh, and also just plodding along because of the change in schedule.

Nothing fancy to see here (literally nothing as I forgot to take a picture again.) Everything was good, but I thought that cooking it all in the crock pot would help flavor the potatoes and broccoli (I put the pork loin on top of them,) this did not happen though. If we are going by how the week went though then this was a big improvement over Monday’s crock pot disaster. If I do something similar I will make sure to season and broccoli and potatoes next time and not rely on the pork to add flavor.

First off we did this with chick (I just didn’t want pork,) and second while this was a perfectly good spice rub it did not remind me anything at all of BBQ. I expected some level of smokiness or sweetness and it was just boring old spice. This was probably the most boring meal we have had in a while. Not that things need to be exciting all the time, but this was so generic. I mean that’s really it, there is literally nothing else to say about this.

This probably would have been better hot, but I didn’t get to eat mine until three-quarters through a football after getting soaked in the rain. Suffice to say this was another okay meal. We came, we saw, we ate, life went on. Like Monday’s recipe I cooked this in the crock pot too, and I wish the potatoes had softened a bit more, but they didn’t and that was life. Yet another meal to cross off the list as we slowly get through my stupid 365 Rachel Ray book (which has mostly been fails.)

You guys, I couldn’t find farro. I looked at both Albertson’s and Walmart, and couldn’t be bothered to check La Tienda or the expensive health store. So after googling it I subbed barley. The taste probably ended up being a bit different but this was good, really good! It’s basically a salad with steak on top, but the barely added a nice chewiness to it. Both of us were really pleased with this meal, and it would make a great summer meal or lunch prep in the future. If you can find farro where you live let me know what it’s like, I’m curious now that I couldn’t get my hands on it.

We made this back in July as a regular dinner and it was really good then! When I was planning out August I remembered how good it was and thought that it would make a great lunch prep. You guys, I was wrong. This did not reheat well, and had basically no flavor. I ate it all week of course, because it was what was for lunch, but it was eaten somewhat grudgingly. After the week I threw out the recipe and will not be making this again. This is just a lesson though, sometimes what works for one meal is terrible for multiple meals. 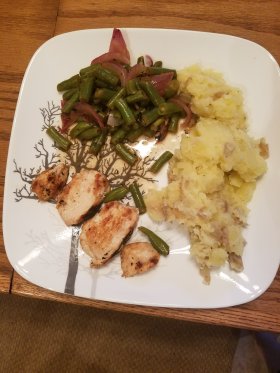 This is a 2nd chance recipe, as in I made it once before and thought that it could be better and maybe I royally screwed it up. It was better the 2nd time, because I didn’t put as much wasabi in the mashed potatoes, but it was still very meh. When I read ginger lime I really expect it to be both ginger and lime like, but there was very little flavor. The one major takeaway from this though, is that mashed potatoes should be experimented with! And as mashed potatoes are Josh’s favorite food we might have to try some of that in the near future.

Monday’s are for the crock pot love and I was starving when I got home, so again no picture. Another 2nd chance recipe which came out way better the 2nd time! This bolognese was nice as an alternative to beef and had lots of flavor. As with all my crockpot meals I assembled this the night before so the chicken could defrost and everything else share flavors. Everything was simple and it really hit the spot after a long day. This is one that we will keep around because good healthy crock pot recipes can be hard to find.

So just meh. Next time I find recipes for meatballs where you just throw them in something afterwards I will pass, hard. We have now tried all the variations in this set and none ended up being special in any way. I 100% could not even taste the pineapple flavor in this, even though I know it was made with it. Luckily this had guacamole which makes everything better, but it wasn’t enough to make this meal a winner. Guacamole, that’s the real champ though of anything really, but no more meatball sandwiches for a while. 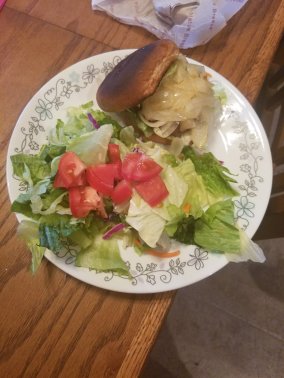 Moving onto something not disappointing was this delicious Onion-Tended Consequences Burger from the Bob’s Burger cookbook. So far every single burger we have made has been delicious and creative. I did make one substitution on this one, instead of Log Chevre we subbed a Laughing Cow Wedge (the consistency looked similar and I wasn’t sure we would ever use Log Chevre again.) Blasphemously I also added ketchup to my burger but it was still just as delicious. As always looking forward to the next one we have, but I don’t like to plan them to close together for various reasons.

This was supposed to be a crock pot meal because I thought I had a football game. I did not have a football so this ended up being cooked fresh. We subtracted some of the liquid to make it thicker and boy was it good. Stew is such a weird thing to be eating before it’s even cold, but really I don’t care. This will be great in the winter and I might have to make an appearance as a future lunch menu item.

Well it was chicken, and it was juicy but it had zero flavor and there were a few issues. First off, I had a hard time getting the lemon in it and no the lemon was not oversized or anything, just a normal lemon. Second putting the mustard on the outside did nothing to the flavor. Maybe it is what made it juicy but as far as actual taste zilp, zich, nada. The one thing I did take away from all this though, was that roasting a whole chicken is incredibly easy, but next time I’d enjoy it more with some flavor.

Another failure of a recipe. First off  I couldn’t get Buckwheat, I tried, it just didn’t happen. So I made these with regular white whole wheat flour. Then I forgot to buy buttermilk, so that was a fail, and ended up using regular milk. I get the sense though that even if I had all the proper ingredients this would have been nothing special. They were just generic pancakes with apple slices on top. The apple would have been way better cooked before hand and used as a compote. Instead we got slightly cooked crunchy apple slices in our generic pancakes. Thank goodness for bacon right!

If you happen to get one of these per-seasoned Turkey Breasts they are a great meal prep. I baked one and added some broccoli on the side and it was a perfect flavorful meal all week. The turkey didn’t dry out from reheating and while I did get a bit bored by the end of the week, it was a delicious filling meal and powered me until the later afternoon each day. 🙂

Anyway thanks for stopping by and tune in next Wednesday for more food reviews! Have you tried anything on this list? What did you like? I’m always curious to know. 🙂

With All My Good Thoughts,